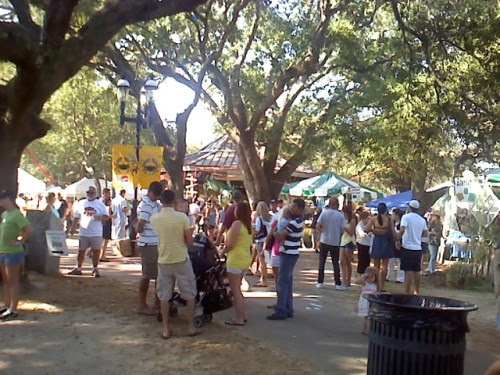 After much anticipation, I finally made to the Pensacola Seafood Festival on it's last day. The festival started on Friday but I had work that day, and on Saturday, I had to go out of town to get a new phone (I'll post about that later). So, it wasn't until Sunday that I would be able to go.

I manage to get there around 3PM and you could see the crowds gathering from blocks away. At the festival, I saw the types of food vendors who were serving a plethora of seafood albeit most of it was breaded and fried. There were some selling grilled food, but that tended to be the chicken, beef, and pork kind. I did my usual thing and grabbed a couple of chicken shiskabobs and a soda. I did notice something that wasn't there in previous years; I saw someone selling turkey legs. They also served beer and other cocktails at this year's event.

I have two gripes about the festival. First, the price of food is getting a bit rediculous. I paid $10 for two shiskabobs and I saw a sign that said $7 for an Italian sausage. For Pensacola, this price level is insane. If the price goes up next year, I don't think I'll be buying any food there anymore. Secondly, the music venue needs to get better. I have lots of respect to the local bands that play at these events, but it feels like it's the same band that plays at all the festivals. Whoever organizes this event needs to try to get some big name bands to come if they really want to market this event as one of the Gulf Coasts best events.

This year, I failed to get a t-shirt to add to my collection of festival shirts. I actually do not collect these shirts but I do buy one to support the events. I wasn't able to get a shirt this year because they ran out of large and above sizes. (I guess people in Pensacola are getting heftier each year). I didn't want to just buy any shirt, so I decided to keep my money. Better luck next year, I guess.

I'll be posting some more pictures in the photoblog and on this site. I need to find my cables or my card reader so I can get them out of my digital camera. I'm not digging through my box of cables tonight, so, I probably won't get to it until some time tomorrow.