I'm suddenly feeling poor after some miscommunication between my doctor's office, my pharmacy, and my prescription insurance carrier. The carrier is not going to cover my new prescriptions because I just refilled my old prescriptions last week. Apparently, my carrier has some kind of monthly limit that I was not made aware of. Instead of normally paying $100, I have to pay $378 if I want to get my new medication.

Should I pay the pharmacy to get my pills and be broke? Or should I wait three weeks to resubmit my prescription, pay less but become sicker than I am now?

At this point, I'm going to have to return some Christmas gifts that I bought this morning. That should get me part of the money that I need.
Posted by Byte Monkey at Saturday, November 21, 2009 No comments:

Email ThisBlogThis!Share to TwitterShare to FacebookShare to Pinterest
Labels: healthcare woes, medication, things that piss me off

Today has been a day of disappointments.

After having a bad morning at the doctor's office (Is there really a good day at the doctor's office?), I spent most of the work day anticipating the arrival of what should have been a "Mint-In-Box" Trendmasters Lion Voltron that I had won on eBay. As I watched the tracking data plot it's course from one side of the country to where I lived, I was deliriously excited when it said it was on my front porch.

At first, I was impressed at the amount of packing material used by the seller. (I think a forest may have been cut down just to fill up the over-sized box). Later I realized that it was likely an attempt to hide something. When I opened the box, I noticed some big scratches and a couple of cracked pieces on the Black Lion. Then, I found that the tip of the Blue Lion's tail had been broken off. This was obviously not "Mint-In-Box." I've been a collector for a very long time and I can say that this Voltron is probably a "C5" or lower on the C Scale.

Lessons Learned: Ask lots of questions to the seller about an item and look at the pictures closely before making a bid. Don't hesitate to ask for more pictures or demand more details about an item especially if the item is pricey. Contact the seller and eBay if you feel you've been deceived. Beware of no return policies. (Unfortunately, my purchase had a no return policy)

All in all, this Voltron will be okay as a display piece although anyone with a functional eye will be able to see the broken parts. I'm considering putting this in my office since it's already damaged. At least I won't have to worry if my co-workers break it.

Below is a picture of the 1998 Trendmaster Voltron next to a 2009 Taiwanese LionBot. They're pretty much the same size with some stylistic differences. I'll write up an more in-depth review and comparison at a later date when I'm a little less pissed off about being scammed. 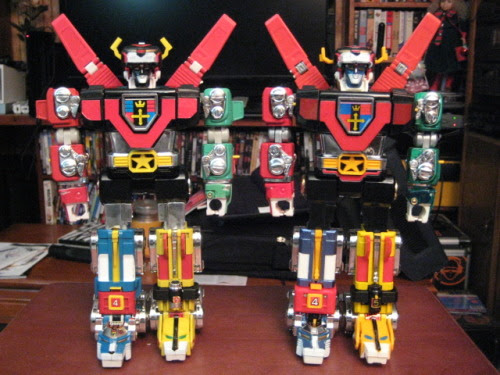 Posted by Byte Monkey at Saturday, November 21, 2009 No comments:

Email ThisBlogThis!Share to TwitterShare to FacebookShare to Pinterest
Labels: anime, eBay, japanese, robots, things that piss me off, Voltron

I wasn't expecting any packages today. So when I found a box on the porch, I was brimming with excitement. I knew it was going to be one of the giant robot figures that I ordered but I didn't know which one it was going to be.

This package apparently contained a 1982 Matchbox Vehicle Voltron. It's vintage and not a knock-off. Being more than 25 years old, I was not surprised at its condition. It has a lot of play wear and some parts were broken but it's overall in good condition. It's perfect for display as the figure will probably not hold up to any kind of heavy play. 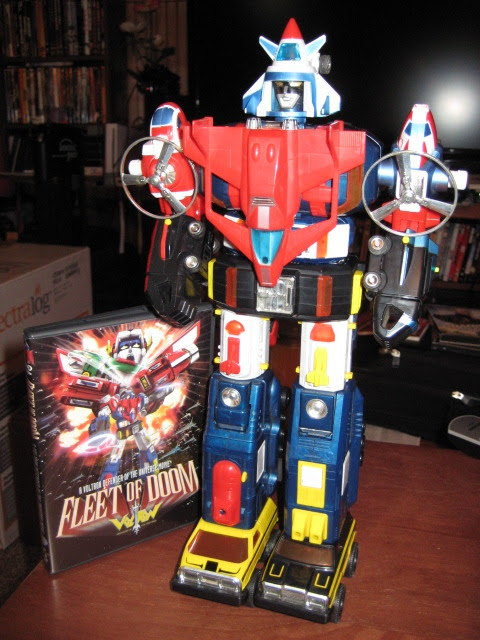 Vintage Vehicle Voltron circa 1982
Posted by Byte Monkey at Thursday, November 19, 2009 No comments:

The Quest for Voltron In 1984, Voltron was introduced to the world, and eventually, thousands of children begged their parents for a Voltron robot for their birthday or Christmas.

I was not an exception to this phenomenon, but the reality was that my family couldn't afford the luxurious toy so I never actually owned one. Instead, my parents would take me and my brother to visit the toy at the department store while they did their shopping. I remember staring at the toy from behind the display case glass and imagined how awesome it would have been if I could own and hold the mighty robot my hands.

Some time later, the store on the street near my house actually had a Lion Voltron for sale. I remember that it was still very expensive, and I went to see it almost everyday after school for what seemed like months.

I remember going to the store with my friends and we would stare at it for hours through the store window. We bullshitted about who among us would be the ultimate owner of the toy. As it turned out, none of us would as our families could not afford them. As time marched on, our Voltron craze would be replaced by other childhood infatuations such as yo-yos, G.I. Joes, and BMX bikes.

As I grew up, I kept my eyes out for my chance to buy a Voltron robot but something always got in the way. Either, I didn't have enough money to buy one or the toy was just simply out of season and unavailable. I recall the last chance I had to get a Voltron was in 1994 and I missed it then because I had spent my money buying a CD player.

Eventually, the Internet would be created and web sites like eBay would make the quest for such hard to find collectables less epic. Despite being available online, Voltron still escaped my grasp since the prices of what people were selling them was way too high for a just anyone to buy.

And now that I have a decent job and this year being Voltron's 25th anniversary, I have decided to fulfill my childhood ream and purchase a Voltron figure. Now, I'm not sure how I will get it , but I made a promise to myself that this will be the definitive year.

Looking back, the yearning to own a Voltron robot never really died in me. For 25 years, it has been floating in my subconscious, influencing how I think, what I say, and sometimes what I do. This has been a hole in my soul for far too long and I truly intend to fill it with the real thing and not some kind of substitute.

My quest for Voltron helped me learn three things: 1.) You need to work hard to get what you want; 2.) There are things in this world that you can't have no matter how hard you work at it; 3.) Sometimes, life will give you a second (and sometimes a third) chance with things.

It may sound silly, but if I had a chance to find my long lost childhood friends, I would like to buy each one of them a Voltron robot. Sure, it's highly unlikely that this will ever happened, but one thing is for sure. At one point in time, a handful of kids in the poor section of the Philippines all had the same dream of owning a Voltron robot. This dream gave them something in common and brought them together in their friendship.

What about you? Do you have something that you wanted as a kid but never did get? It may sound foolish, but I hope you know it's not too late. Live your life without regrets!
Posted by Byte Monkey at Monday, November 02, 2009 No comments: