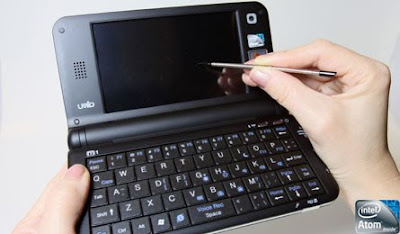 Over the last couple years, I have bought two Asus netbooks, the iPod Touch, a SmartQ 5 mobile internet device, and a Nokia N810 internet tablet in the quest for the ultimate portable computing but none of them really did what I wanted them to do.

Despite their small form factor and adequate processing power, the netbooks were really not as “pocketable” as the other devices. The iPod Touch was great but could not display Flash content. The SmartQ 5 and the N810 suffered from all the pitfalls of that plague underpowered Linux-based devices. It was not until I came upon the UMID mbook M1 that I felt that I have achieved real portable computing.

The UMID mbook M1 is one of the smallest netbooks in the market. When I say small, I mean tiny. Its dimensions is close to the size of two stacked checkbooks. The best part is that it’s powered by an Intel Atom processor and runs Windows XP. This means that I can have a complete web experience that includes being able to view Flash content. Since it’s on WinXP, I can install Adobe Reader to read PDFs without buying some kind of app. I can install MS Office or OpenOffice to open and edit my documents without worrying about compatibility and conversion issues. The mbook also has a 1.3 megapixel web cam so you can use it for video calls using Skype. It can do everything that the iPod Touch, SmartQ and N810 could not do. It even has a touch screen so you don’t need a mouse.

Now the mbook M1 is not perfect. It’s the first generation of mbooks and suffers from a mini USB port that needs an adapter to use and a semi-proprietary audio jack. All of these issues have been addressed in the newer mbook BZ model, which, in retrospect, was the model I should have gone with but I was trying save some money and got this older model instead.

Despite it’s flaws, it’s still a very capable portable device and I love it. There is nothing like having the ability to experience the web the way it was meant to be and the ability to watch Hulu on a device that fits in your pocket is also totally awesome.

Learn more about the UMID mbook M1 (or BZ) at Dynamism.com
Posted by Byte Monkey at Tuesday, February 23, 2010 No comments: 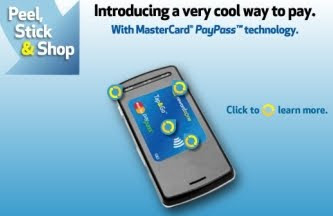 Last month, I received a letter from Best Buy that I was being pre-selected to try out their Best Buy Reward Zone MasterCard® PayPass™ Tap&Go™ tag. As it was explained to me, it is basically a RFID decal that you could stick on a mobile device that you always carry around like an mp3 player or your phone.
RFID (Radio-frequency identification) card is not a new thing. They've been in use for years in the US in passports, credit cards, and even in some cell phones. There's even a continuing debate on whether they are secure and whether company or governments could use it to invade your privacy, but don't worry. This post is not about me weighing in on those issues. I'll save that kind of stuff for a rainy and boring day.
What has gotten me posting is the fact that this RFID is being presented in the form of a decal. I read somewhere on Wikipedia (so take this with a grain of salt) that Dairy Queen and some company called Vivotech was actually working on RFID decals to give to their customers as part of their new loyalty and rewards program. Basically, Dairy Queen customers could get coupons and discounts if they held the decal over the RFID sensor at their stores. I guess Best Buy and their financial provider, HSBC, just took the decal idea and placed a credit card RFID chip instead.
At the moment, I'm having a lot of fun with the Tap&Go tag which I placed on my cellphone. The look on people's faces and listening to their reactions when I pay by tapping my cellphone on their express pay terminals has been quite fun and revealing. So many places didn't even know that the credit card terminals could handle contact-less payments and I had to explain to them what the "express pay" symbol on their terminals meant. Some new about it, but didn't know that credit card Tap&Go decals existed.
To learn more about Reward Zone MasterCard® PayPass™ Tap&Go™ tag, visit https://www.rzmctag.com/
Posted by Byte Monkey at Saturday, February 13, 2010 No comments:

The weather man said that it would snow in Pensacola, Florida today, but I haven't seen a flake fall from the sky. All that it's done is rain and be cold. Now, some people have claimed to have seen snow and some have even taken pictures of small white specks floating in the air, but those people don't work or live anywhere where I am.
At the moment, the rain has stopped but it's still cold. I don't think I'll see snow anytime soon around where I am. Too bad. I was somewhat excited at the prospect.
Posted by Byte Monkey at Friday, February 12, 2010 No comments:

Email ThisBlogThis!Share to TwitterShare to FacebookShare to Pinterest
Labels: weather

And So We Shift

Hopefully you've noticed that this blog has shifted from being on http://www.byte-monkey.com and now on to http://bytemonkey.blogspot.com. This because Blogger, owned by Google, has decided to discontinue support for FTP service for bloggers who host their blogs on their own servers. (Here's the official announcement).
Blogger decided that FTP users were too much of a drain on their resources and decided that everyone of their users should just use their 'blogspot.com' servers. They claim that this will increase performance and allow users to use new features that were only available to those who chose to host their blogs on blogspot.
As a consolation, Blogger does offer a paid custom domain name service which will allow users to have their custom web address that is not tied to their 'blogspot.com' domain name. Unfortunately, this does not help people who already have their own registered domain name. These people will ultimately have to reconfigure their domain to resolve to the 'blogspot.com' server and correct for any orphaned links.
All in all, it's just one big giant headache for FTP publishers, but Blogger has promised to provide some migration documents for anyone willing to spend their time correcting and patching their blogs. Although, I suspect that most Blogger.com FTP publishers will probably choose to abandon the service and seek out other blogging platforms like WordPress or Drupal. To be honest, if you're looking at spending hours to patch your blog so it will work with someone else's domain name, you'll probably want to consider starting fresh with something that has proven to be stable and well-supported by communities of users just so you can keep your domain name.
As for me, I've decided to just shift this blog into 'blogspot.com.' Sure it was tedious, but I actually enjoy working with code. The byte-monkey.com domain will remain and will contain the portal page to my various online blogging accounts. I'll also be hosting my pictures on my server because I don't trust Google's communal servers.
Posted by Byte Monkey at Wednesday, February 10, 2010 No comments: