Last Thursday, I bought the Bluray disc for Avatar and discovered that it doesn't work well with my less than 2-year old SHARP BD-HP22 Bluray disc player.

Being a techie, I knew that some of the newer Bluray discs would require a firmware upgrade. Without hesitation, I went to the SHARP website, downloaded the latest firmware and easily installed it. It was a very painless process, but my happiness would not last, as I discovered that the firmware update did not fix my problem. With the Avatar Bluray disc, some kind of time-line pops up during the movie every 3 minutes and stays up for about 10 seconds of so. It is very annoying and keeps anyone from enjoying the movie.

I contacted SHARP via Twitter (@SHARP_USA) but they refuse to respond or acknowledge the issue. I guess they just want me to chunk my faily new BD player and buy a new one which is something that is unacceptable. SHARP needs to support all their current devices. It's not like I'm asking for technical support for a 80's tape deck. This is a bloody Bluray disc player. This is current technology.

I fully intend to tweet everyday about this issue until I get an official statement from them. If I get any response, I'll make sure to let all of you know.

Below is a Youtube clip of a similar issue being experienced by Samsung Bluray players. Obviously, the problem is not limited to SHARP. Hopefully, all the BD player makers can get together and fix this issue. If they don't, they'll have a lot of pissed-off consumers who may decided to boycott Bluray discs.

Email ThisBlogThis!Share to TwitterShare to FacebookShare to Pinterest
Labels: things that piss me off


Amber Case presents a lecture about Prosthetic Culture. She is a Cyborg Anthropologist studying the interaction between humans and computers and how our relationship with information is changing the way we think, act, and understand the world around us. She’s obsessed with compressing the space and time it takes to get data from one place to another, especially when the final destination is the mind. You can follow her on twitter at twitter.com/caseorganic.
Posted by Byte Monkey at Sunday, April 18, 2010 No comments: 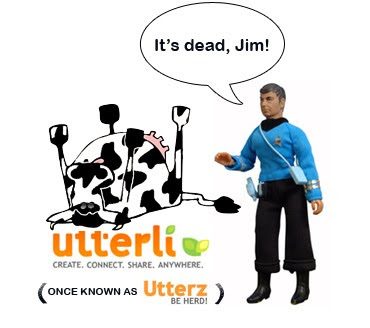 It looks like Utterli.com is dead.
Once known to it's users as Utterz, the site provided users a way to post audio, video, and pictures online. More uniquely, the service allowed users to make voice posts by calling a phone number which literally gave it's users a "voice" on the Internet. Utterz/Utterli posts was also able to replay one's post to other blog services like Blogger, Tumblr, and WordPress, turning the service into a sort of online posting hub.
Ever since Utterz was re-branded as Utterli by it's owners, RPM Communications, Inc., user support and service seemed to slowly decline. Personally, I left Utterli after I could not get any support to resolve my picture messaging problem which other competing services had solved very easily and quickly. I still kept my account open so that I could listen in to other people's post but my involvement eventually waned as most of the users migrated to other services like Twitter or Facebook. Many left because of the lack of tech support. Others were tired of seeing too many spammers joining and disrupting conversations.
Although never confirmed by RPM Communications, many user believed that the change from Utterz to Utterli was an attempt to make the service more attractive to investors or perhaps to other companies who might be interested in buying the service. There was an underlying feeling among the users that the company wasn't quite doing so well after administrators and support techs suddenly disappeared and the site's homepage was never updated after the rebranding.
Although, I had moved on to other services, I still feel sad to see Utterz/Utterli go. I met and conversed with a lot of great and talented people that I respect and admire. It was also place that offered a glimpse at many varying life styles and point-of-views of the people in the United States and beyond.
The service's demise now leaves many of it's orphaned users having to clean up their blogs and remove all the broken links that link back to Utterli. Since there was no warning to site's closing, users were not able to back up their postings. All of the users data was subsequently lost from the closing.
We all knew the party wouldn't last forever. All good things in life do eventually come to an end.
Goodbye Utterz. Goodbye Bessie the Cow. Goodbye yellow and green leaf-lemon thing. Good bye Utterli. You will all be missed.
Posted by Byte Monkey at Sunday, April 18, 2010 5 comments:

Email ThisBlogThis!Share to TwitterShare to FacebookShare to Pinterest
Labels: things that piss me off, Utterli

As a gadget geek, I'm always intrigued by what's new and available to the average consumers. This time, something in the realm of portable music players caught my eye – and ear.
During a random expedition to the Radio Shack in Gulf Breeze, Florida, I discovered that they were having a sale on Sansa products. Having been in the market for a replacement MP3 player, I decided to look over their selection to see if I could find a bargain. There, I found a good deal on a Sansa Fuze but what really got me was the slotRadio music cards.Publish Post

slotRadio cards are micro SD cards that contains a large library of music which can only be played on slotRadio players or select Sansa devices. Each card contains several predetermined playlists and is available in several genres such as 80's/90's, Oldies, Country, and Hip Hop/R&B. Users have the ability to skip as many songs as they want but won't be able backtrack to replay a song. This is similar to how some music streaming services like Pandora Internet Radio operate except slotRadio does not need to be connected to the Internet.

slotRadio cards are prefect for those who don't have reliable access to a computer to download music from. Also, those of you like me who can't afford to have an unlimited data plan on their iPhones or Blackberries to play Pandora an Wi-Fi hotspot isn't available, this little SD music card is worth the price. Each card supposedly holds 1000 songs and is priced at about $30 depending on where you buy them. That's basically 3 cents person and when you compare that to 99 cents per song on iTunes or whatever insane price AT&T charges for unlimited data plan (I don't own an iPhone or Blackberry, so I wouldn't know exactly how much they're mugging your wallet for). The whole things is basically a no-brainer.

Now, some of you are probably wondering if the cards have been loaded with songs that no one really wants to listen to. Perhaps, you're thinking that this is probably the reason why the songs are so cheap. Well, rest assured that each song on the cards are from Billboard's top charting artists. They're not cover bands. They're not fake. They're the real deal.

Personally, I've been enjoying the slotRadio Daily Mix and 80's/90's cards at work whenever I can't get my iPod Touch to connect to Pandora through the Wi-Fi. In reality, it's not a burden to carry the Sansa Fuze with the slotRadio card. They're relatively small and compact. Plus, they're durable enough to be in my pocket which is something I can't say about the iPod.

All in all, I think slotRadio is a great idea. It's better than the radio because it has no commercial interruptions and you can skip songs. It's on par with Internet radio but wins overwhelmingly when you don't have access to the Internet. Now, if Sandisk would only improve their telephone customer support, then everything would be perfect.

If you'd like to learn more about slotRadio, visit http://www.slotradio.com/
Posted by Byte Monkey at Monday, April 12, 2010 No comments:

For your amusement, here's a cat standing up...